Okay friends – I’ve been writing non-stop forever so I don’t want to talk about writing. Let’s talk about TV instead.

I am a TV snob. I admit it. I watched every episode of all ten years 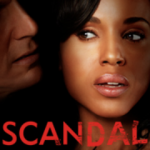 of Buffy the Vampire Slayer (oh – the genius of Whedon) and gave up TV for an entire year after it went off because nothing was good enough – I kid you not.

I give a show three episodes to grab me or they lose me forever. And if you piss me off with a stupid move in Season 7 (like say . . . Bones?)

I mean really? I stay with you through 6 seasons of “will they/won’t they” . . . I CRY with Boothe when Bones says she can’t love him on the 100th episode . . . and you fast forward over the summer and rob me of all the pleasure of seeing them get together and drop right into a full-blown relationship with a baby on the way? Bones . . . you are dead to me . . .

So, I am am not an easy TV viewer to woo.

I recently watched the first season of Scandal on Netflix and I thought it had some really great parts. Olivia Pope is an amazing female character – strong but flawed- and the cast of characters (her Gladiators) are all damaged people with hidden pasts. And Tony Goldwyn . . . I have loved him since he played the villain in “Ghost”.

I LOVE the fact that the main couple is interracial. It’s. About. Time.

The political intrigue of the show doesn’t appeal at all. I live near DC and politics are tedious and not my idea of entertainment but I do love the twists and turns. I kept watching past episode three but I have to admit that my mind was wandering and I was resisting the urge to fast forward during episodes 6 & 7.

So, right now I’ve tagged Season Two for placement in my queue and I’m going to give it three more episodes.

So die-hard Gladiators – tell me why you think I should keep watching?