We all know the adage if you can’t say anything nice, don’t say anything at all. And generally that’s a good thing. What about when it comes to book reviews on Amazon or Goodreads? Should authors give their honest opinion about books written by fellow authors?

As much as I am a published author, I might be more of a reader. I’m addicted to romance novels and read 2-3 per week. I often want to discuss them, possibly in a public forum, but the day I was published was the day I stopped giving my public opinion about a book if I think it’s anything less than stellar.

I retweet and Facebook share tons of links to good reviews and any promo for fellow writer friends, but it’s been a long time since I’ve had a good discussion about a book. Do I write Amazon reviews? Yes, for members of my RWA chapter, and when I can honestly recommend the book.

I’m not alone in this practice. It’s the dirty little secret that romance authors are stacking review sites and Twitter feeds with promo for their friends. But we rarely go negative.

Why? Because it feels unprofessional to criticize a fellow author in a public forum.

Maybe we should. If I’ve written a sucky book, I’d want to know. Who better to tell me the whys of it then a fellow romance author? I’m still scared though. It feels as though I’d be opening myself up as the terrible person who criticized a colleague on the internet.

What do you think? If you’re an author do you write negative honest reviews? Why or why not? Would you think less of an author who did?

Thank you for hosting me!

It was our pleasure, Lynne, and you raised some great questions!  Thank you so much for being our guest today.

Check out the latest release in Lynne’s Coded for Love series with Ellora’s Cave, False Match: 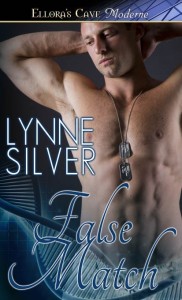 Genetically enhanced soldier Chase Stanton has two jobs in life. One, he must kick ass on all missions for the Program and, two, breed with his DNA breed mate, whoever and wherever she may be. Two problems. Chase learns he isn’t genetically enhanced after all and Doctor Samara Jones, the woman he craves beyond all reason, is likely an enemy of his team and not his true match. Too bad they can’t keep their hands off each other.