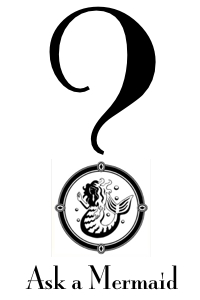 Normally, Ask a Mermaid is limited to one question and a handful of answers. However, when Courtney Milan agreed to answer all of our questions about determining profit and loss, how could we say no? The conversation started after this discussion on Dear Author about the hidden costs of 99-cent books. In the comments, Courtney revealed she runs a profit and loss analysis for each of her titles.

We had to find out more and Courtney agreed to come hang out in the Waterworld Mermaid lagoon and explain it all. It was all so awesome that we had to drag her back into the pond for a second day. (You can read day one here.)

How could a writer implement this in their business plan?

Here is my shocking answer: I don’t really know. I don’t have a business plan besides: “Write books, hope people buy them.” I know that it seems contradictory in comparison with the fact that I have this huge, massive, detailed P&L procedure, but I’ve read about business plans and every time I think of doing one, it sounds boring so I don’t do it. Bah humbug. I like examining trees. I don’t care about what the forest looks like.

I have now horrified every accountant who was nodding her head about my P&L procedures.

Do you do a profit/loss projection for every title?

I do a profit/loss projection for every discrete project, not just every title. Let me explain. After I decided to self-publish, I got an introduction to a German translator, and the opportunity to have her translate my novella into German. I already had a few of my first books translated into German, and so I thought, basically…well, is this worth it?

So I ran a P&L. I estimated I would pay a little more than $2,000 for the translation and proofreading. Since I was planning to sell the book at €1.99, I’d make about 83 cents per sale—meaning I’d have to sell about 2,400 copies to make a profit on that particular project. At the time I had literally no information about the German digital market. At the time when I agreed to do this, there was almost no digital market to begin with! Amazon.de had only just opened its doors—in fact, I started talking to Ute, my translator, before Amazon.de went live. Apple’s iBook store was open in Germany, but the volume was super-tiny. I used estimations from the early US ebook market percentages to do my P&L, and I figured that I would be lucky to make my money back in two years. Worst case scenario was that I would get about $50 in income, making a loss of $1950. Best case scenario was that I would make about $2500, which was an infinitesimal profit.

So…why did I do it anyway? Because when I was looking at the income side of the column, I realized there were intangibles in the income side. Having a low-priced short would catalyze sales of my other books, which increased the chances that I would be able to sell foreign rights for my other books. I was also purchasing information—I wanted to get some idea of what the size of the market was for German language books, and this would allow me to know what sales looked like, and to get some idea of when the German language market was ready to take off.

Luckily for me, the market took off much faster than I thought—and I learned a ton about selling to new areas where I hadn’t yet broken in. One of the big things that I learned was that reviews were important to sales. My sales did a huge jump when I got my first review on Amazon.de. So when I put up my second book, I contacted a number of reviewers and sent them review copies in exchange for an honest review. That in turn meant that my second book started with an even bigger bump in sales.

It’s okay to choose to do a project that you think you’ll lose money on if you think you’re taking that profit in other coin—goodwill, information, as a trial run, because you like working with certain people and want to continue doing it…

This will freak some authors out. Should it?

If this really freaks you out and you don’t want to do it, nobody’s holding a gun to your head. My P&L statements are something that I think are of more use to me in determining when not to spend money (and thus reduce expenses), to make me think about what I’m getting from taking on a project. But as noted above, I don’t even have a business plan and don’t plan to write one because I think it sounds boring.

So. I’m not one of those people who will say, “If you don’t do it my way, you are doing it wrong!” Do it whatever way works for you.

Does this only apply to self-publishing or can traditionally published authors use this tool also?

I think that for me, the purpose of running a P&L is twofold.

1. It makes me think about the expenses I incur. Are they worth it? Really? What am I buying for my money’s worth? I had to ask myself, “If this expense is the one that meant I didn’t think it would be profitable to run the project, would I think that it was necessary?” In that sense, running a P&L is like keeping a food diary.

So, for instance, the P&L made me reconsider the expense of attending conferences. What are they getting me? What are they costing me? Does it make sense to spend $2,000 to go to MegaCon just so that 15 more people buy my book, or is there a better way to get 15 people to read my book?  That was a question that I wasn’t doing a good job of asking myself, and it really helped me clarify my thoughts and curtail spending on unnecessary things that weren’t advancing my bottom line. And that’s something that I think every author can benefit from.

2. It makes me think about the non-monetary value that I get from things. There are some projects that I’ve taken on despite the P&L. For instance, I make large-print editions of all my works available through CreateSpace. It costs me $25 to put those versions in expanded distribution, and it’s perfectly clear that I may very well not earn my money back on those. I still keep doing it, though, because I think that it’s important to keep my books accessible to readers who want to read in print but can’t read small type. I get non-monetary value out of making my books accessible. The P&L forces me to admit that I’m doing something for the nomonetary value.

Just because the P&L isn’t favorable doesn’t mean I have to say, “Well, screw it, it’s not profitable enough.”

It does focus my efforts, though. Both of these things are useful for all authors.

What else should we have asked that I didn’t?

You didn’t ask about the value of an author’s time or opportunity cost. (These things are related, of course.) But there are already so many words in this interview that I think we’ll all be happier if I just shut up now. 🙂

We don’t know about you, but we could sit in the lagoon with an adult beverage and chat with Courtney for another few days.