It is starting to feel a lot like Christmas—and Who knows December 25 could mark the return of the best season of the Eleventh Doctor yet!

Yes, I’m referring to Doctor Who, the longest running science fiction television show in the world (It has to be, right?). Fifty years on the air (launching in 1963 -1996 on the BBC and then late-night PBS later) and then the series revival in 2005 with Christopher Eccleston as the Ninth Doctor and after him David Tennant – yum – and now the joyous Matt Smith – who gave us one of the best love stories EVER! But careful, Spoilers…I can say no more!…

Oh, okay, not where you thought I was going?

Well, this blog talks a lot of romance, and the fans of Doctor Who have had one of the longest most satisfying relationships with the Doctor and his companions (and Dalek love is real, too) in entertainment history. And as we all know, if it’s really a love story – you have to write about it.

That’s what Chicks Unravel Time: Women Journey Through Every Season of Doctor Who is all about. A collection of essays written by women about their favorite sci-fi show, and edited by Deborah Stanish (a friend of mine!) and L.M. Myles, and published by Mad Norwegian Press (www.madnorwegian.com), the book was released November 13, 2012. And yes, I’ve been reading the collection and decided, yep, I should write a review because with the return of the series on December 25 at 5:15 p.m. BBC time (US viewers wait a few hours for it to show up On Demand or iTunes:)…it seemed like a good idea. 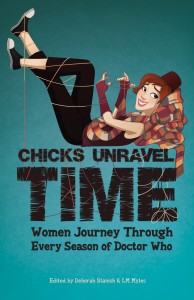 This collection offers a lot of great writing (NY Times Best Selling author Diana Gabaldon is one contributor), but each of the essays share a  female fan’s insights into Doctor Who, and not just the reboot years. A number of the essays focused on classic Doctor Who (pre-2005), and were so compelling, I may venture into the good-old days and check out the much-loved Tom Baker who played the fourth doctor and the companion of all companions, from what I’ve read (and seen when the character visited episodes since 2005) Sarah Jane.

I love good TV (even some bad TV – MTV’s Teen Wolf:), and I’ve also been one to dive into the fandom pond without a life jacket (Shonda Rhimes’ Scandal being my latest obsession), but shows like Doctor Who, that can create this much conversation, passion, and love, are fascinating.

I hope you’ll check out the show if you aren’t already a fan (it’s on Netflix has all episodes since 2005, and a lot of class Doctor Who, too), and whether you are a fan or interested in some excellent essays on an icon of pop culture, check out Chicks Unravel Time.