My first day at RWA2012 was spent at the bar at the Anaheim Marriott (well, I should say, at one of the bars, there are quite a few:)…and yes, I needed a drink after one of the most insane travel days I’ve had in my history of travel (which I’ll blog about later at my blog).

I didn’t arrive until 8 p.m. so I totally missed the Literacy Autographing (not happy about that at all!). So after checking in I went to the bar and ordered a BIG drink and other forms of nourishment.

While at the bar I ran into our very own Mermaid Kimberly (who has a cool hair cut and was looking fabulous). She was with Katrina Snow (201o Golden Heart finalist in paranormal category the same year Mermaid Kimberly was a GH finalist), and Katrina was telling me about the Golden Pen Contest – go now and check it out! Great last round judges, and the early rounds are judged by Golden Heart Finalists – so yeah, I’m going to enter. The deadline is August 15!!!

Sipping on my BIG drink, I then started chatting with first time attendee, and Golden Heart Finalist 2012 for “Faking It” in the Novel with Strong Romantic Elements category), Nikki McIntosh, who is also her chapter President, and she’s fr0m Canada. She told me where in Canada, but I was drinking the BIG drink, so some things slipped from the memory banks. Well, she’s delightful, and we were chatting it up when we were joined by her roomie, Joanne Lockyer, historical romance writer from Australia. She invited me to tell my story about how I got started in romance writing for a documentary being filmed here called “Love Between the Covers.” I’ll tell you how that goes!

Then there was Bruce (I think his name was Bruce-but you know, the BIG drink picks and chooses its moments to shine) – but he was definitely the husband of a first-time attendee and was Mr. Supportive. I could also tell he was a bit in awe of the Conference and his wife’s commitment to writing – up all night writing, up all day working, and to quote, “She’s have the time of her life.” Yep, we writers do love to write.

Today I’ve got bunches of workshops and a luncheon to attend. And of course, running into old friends, and meeting new ones is always on the agenda. Later, I’ve got got a date later with Michelle Monkou. We’re heading to the Passionate Ink Party, which should be BIG fun. (and maybe I’ll have another BIG drink by then. What do you think?)

PS: Take a look at the BEST BAG ever! And yeah, TODAY’s GIVEAWAY to a commenter selected at random is a copy of The Taker (I grabbed an extra) by Alma Katsu. 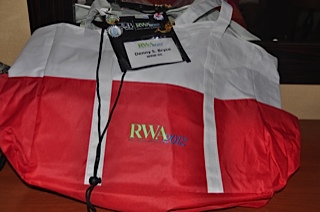