Hi!  My debut release, A NIGHT OF SOUTHERN COMFORT, was released on 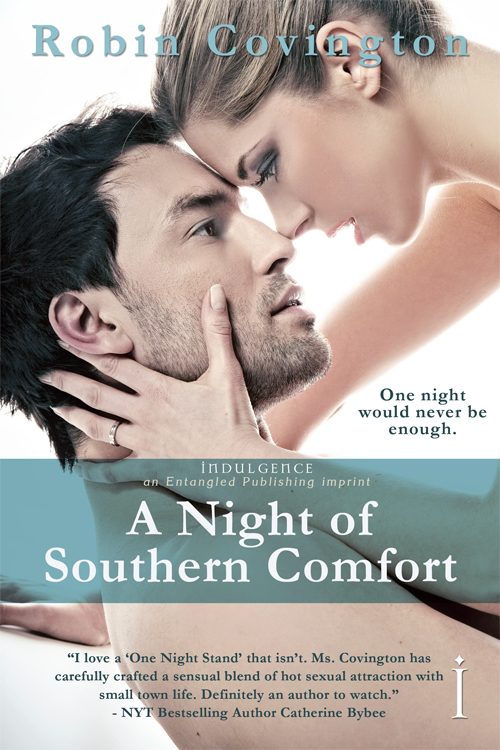 I want to thank all of you who bought the book, left a review or sent a message to me about how much yo enjoyed AN0SC – it means so much.  Reviews have been amazing – 27 5-star reviews! WOOT!

So, since my brain is too fried to think up an original post, I’ve decided to post an exclusive excerpt here at the the Lagoon!  Enjoy! Robin

Pink tinged her cheeks as she shook her head and looked down at the tabletop. Her hands gripped the edge with white-knuckle tension. He guessed she struggled with whether she should stay here in Elliott. She was too smart not to have a backup plan. The fact that she needed one pissed him off. He’d been on edge since the meeting with the governor in Richmond and now he was wound so tight he either had to fight or fuck the anger out of his system before he blew.

Jack moved in his seat and jostled the table, causing Kayla to look at him.The jolt of cellular recognition crackled between them like a live wire. He’d read about it—that crazy moment when your body remembers where it has been, whom it connected with, and yearns to be there again. Frankly, he was surprised that the Formica covered table hadn’t gone up in flames.

“I guess this is a pretty crazy coincidence.” With a shaking hand, Kayla smoothed her hair back from her forehead.

“I don’t believe in coincidence.”

A furrow creased her brow. “What? How can you say that? The bar? My father’s house? This town?”

Jack leaned forward and placed his hand on the table, only a hair’s breadth from where hers lay. It took everything he had to resist closing that gap. “Doc, you went to the bar looking for a man and I happened to be in the right place at the very right time. That’s not kismet—that’s just probabilities.”

“No.” Her voice was a hoarse whisper that curled around his gut in a tight clench. “I wasn’t looking for a man at all. That changed when I saw you. I picked you because I couldn’t not pick you.”

At her words, his entire focus shifted to include only her. Kayla’s expression was defiant, daring him to refute what she’d said. He couldn’t. He couldn’t even speak, much less argue. Frankly, he didn’t know if he wanted to. The thought that someone like Kayla might actually want him scared the hell out of him.

His mom approached the table and “tsked” at the untouched pie on his plate. “Y’all want anything else?”

Never breaking eye contact with Kayla, Jack closed the distance necessary to cover her long, delicate fingers with his own.

“Dr. Roarke will take the pie.” He briefly calculated just how dumb his idea was, but with all of his blood flowing to his crotch, he couldn’t count that high. “To go.”

Blurb:
One night of passion…
Detective Jackson Cantrell never imagined that one night with an irresistible stranger would turn his life upside down. He’s spent years living in the shadows, but Dr. Michaela Roarke awakened a passion inside him he’d buried years ago.
He never expected the woman would turn out to be the governor’s daughter…and his next assignment. The governor blackmails Jackson to secretly watch over Michaela and protect her from a stalker, or kiss his dream job at the FBI good-bye. Swearing to keep things strictly professional, Jackson moves in with Michaela. Too bad his heart can’t keep the same promise.
But when the stalker’s attacks quickly escalate beyond mere photographs to bodily harm, Jackson must race to save Michaela’s life. And he’ll have to figure out how to keep her once she discovers his lie.

15 thoughts on “A Night of Southern Comfort – an exclusive, sizzling excerpt”