It’s graduation season, a time I remember very well. Boring speeches, fun parties, talk of the past, hopes for the future, and friends. I still get choked up thinking about my high school graduation. I grew up in a teeny, tiny town where the people I graduated with were also in my nursery school class. I truly knew nothing but those people and that world.

So that final summer was interesting. On the one hand, you’re so excited to leave. Off to college, life is going to begin, it’s exciting. But there’s that part of you that isn’t quite one hundred percent positive that this is going to turn out okay. I’d go to a party and have fun thinking about how it was going to be one of our last night’s together but I’d also get sad thinking how it might be one of our last night’s together.

You can’t really describe it but you feel the change happening. 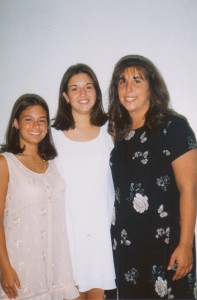 My two besties, Danielle and Amber, spent that summer doing what we did all through high school – going to the movies. We came of age in the Era of DiCaprio so he was a particular favorite. I don’t remember what that last movie we saw together was, but I do remember the preview. There, right in front of us, was Leonardo DiCaprio, the love of all of our lives, on some big boat called Titanic. He stood on the edge of the ship with that actress who was in Sense & Sensibility (this little movie I forced Amber and D to watch one million times once I discovered Jane Austen). Leo, S&S actress, disaster movie, love movie. Coming soon.

We sat, mesmerized, staring at the big screen. December 19th.

The three of us went to three different colleges in three different places. We had three different majors and interestingly enough, we all changed our majors by the end of that first year. But we kept in touch. No, it was not the same as it had been in high school. But every letter (yes, we still wrote them), email and phone message ended with DECEMBER 19TH. We had decided that we would meet on December 19th and see Titanic together. During a very tumultuous and tough first semester away from everything we had grown up around, December 19th got us through like a beacon of light in the distance.

Sadly, we didn’t get to see Titanic on December 19th.

When making future plans, one should remember that college freshmen have these pesky little scheduling issues called finals. But don’t worry. We did see Titanic that Christmas.

And it was amazing! By the end of that three-hour long epic, and like every loyal girlfriend of Leo, we knew our lives had been changed. All three of us turned to each other, realizing the bigger picture. And we hugged and cried and cried – right there in the movie theatre. Sure, we cried for Leo and all those who perished. But more, we cried for change.

Eventually, the lights came on and the janitors made “annoyed” sounds as we continued to hug each other, knowing that we had reached that faraway beacon of light and it would never be the same again.

We graduated high school fifteen (ugh!) years ago and I still consider D and Amber to be my two closest friends. They are still the two people who care about me the most. And guess what? Titanic was re-released this year!

So I have to laugh as I watch people at graduation ceremonies. I smile when I hear someone complain about the movie Titanic. I look at both of those things as a hugely important part of my life. And I wouldn’t change a thing about it…. 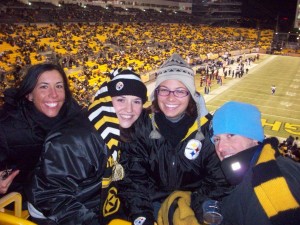