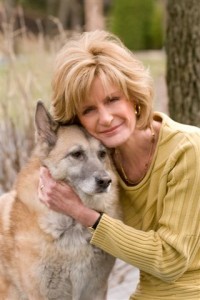 I am so excited to have my critique partner, favorite suspense romance writer and good friend, Gail Barrett with us today!

She is the author of nine Harlequin/Silhouette Romantic Suspense novels and a Silhouette Special Edition which won the Golden Heart.  Gail says she always knew she’d be a writer, and after living everywhere from Spain to the Bahamas, earning a graduate degree in linguistics, and teaching high school Spanish for years, she finally fulfilled that lifelong goal.

Her latest book in her Stealth Knights series, High-Stakes Affair is out and what a book it is!  Gail has a way of capturing our hearts with bad-boy heroes and the women who come to love them. 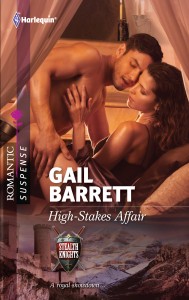 Gail, we’re honored and delighted that you took the time to join us today here in Mermaid Lagoon.

Tell us a little more about your inspiration for your latest series, Stealth Knights and latest book in the series, High-Stakes Affair.

Thanks so much for inviting me!  It’s truly an honor to be here!  The Stealth Knights came about when I was brainstorming ideas for a new miniseries for Harlequin Romantic Suspense. I didn’t want to take the traditional route and base my series on a fictitious military agency or other conventional group — SWAT teams, cold case detectives, Black Ops or Navy SEALS. Although those kinds of heroes are great, they’ve been done so frequently — and so well — that I wasn’t sure I had anything unique to add.  And honestly, I’ve always been more intrigued by men who don’t obey the rules — those darker, murkier characters who follow their own moral principles, meting out justice as they see fit. So I decided to go against the norm and invent a more offbeat group, a secretive, loosely affiliated association of thieves, spies, and rogues who operate in that gray area between right and wrong — usually outside the law. Of course, since these are romantic heroes, they really are the good guys, albeit in a less obvious way.

Harlequin loved the idea.  They named the group The Stealth Knights and gave them slogan: The Stealth Knights: powerful, passionate heroes with their own code of law.  They also created a cool little “flash” logo which consists of a shield with swords. 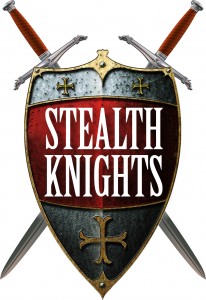 So far, there are two books in the series — HIGH-RISK REUNION, which came out in November 2011 and HIGH-STAKES AFFAIR, which is out right now.  They both take place in an old world, Pyrenees Mountain kingdom called País Vell.  Centuries ago, País Vell conquered its neighbor, Reino Antiguo, which the people of Reino Antiguo still resent.  They’ve formed a separatist movement to win back their independence any way they can.

The hero of the latest book, HIGH-STAKES AFFAIR, is not only a rebel from Reino Antiguo, he’s the most infamous of them all — “el Fantasma,” a Robin Hood-type thief adored by his people and the sworn enemy of the crown. Of course, the heroine, Princess Paloma Vergara, isn’t aware of that. She needs Dante’s help to break into a casino and confiscate some incriminating blackmail evidence that could damage her family and provoke dangerously violent unrest. What she doesn’t know is that she’s about to hand their worst enemy the power to bring them down.

What inspires you to write about such unique topics for your characters to endure?

I’m something of a news junkie, so I usually get ideas for my stories by reading about current events.  There are so many nefarious activities going on in the world that it’s pretty easy to come up with something diabolical for my villains to do.   It probably helps that I tend to be a rather cynical and suspicious person, so it doesn’t take much for me to imagine the worst.

What’s your schedule like lately and how do you find the time to write such intriguing suspense stories?

Ideally, I start writing by 7am every weekday. I’m a very early riser, so by 7am I’ve had my coffee and breakfast, showered and answered emails, and am ready to go.  I take a brief exercise break at around 9am to wake myself up, and then a longer exercise break in the early afternoon.  I don’t do much writing after that unless I’m on deadline.  I’m much more of a morning person. I also work on the weekends, but usually I go for a long walk with my husband in the morning, and then write for a bit in the afternoons.

As a writer, do you find yourself more of a ‘pantser’ or a ‘plotter’ when you sit down to write your next novel?  Do you have a general idea and work from there or do you just write and have the ideas come to you?

By nature, I’m a plotter.  I like to know who my main characters are, what their conflicts will be, and especially what will happen in the black period to tear them apart before I begin writing the book.  I pretty much plot toward that.  Also, since I’m writing romantic suspense I have to know what the villains are up to.   I try not to plot each scene too extensively in advance because I want to give the characters a chance to surprise me, but I think romantic suspense demands a lot of plotting up front. I also revise as I go, so by the time I’ve arrived at the last chapter, I’m pretty much done.  I don’t do extensive rewrites.

You’ve written ten novels (at print) so far. Did you always intend for most of your novels to be of the suspense genre?  Do you read suspense for pleasure and who are some of your favorite authors?

When I got serious about writing commercial fiction, the first thing I did was to analyze what I liked to read.  I realized that the elements I liked most in books were the mysteries and romance.  That’s how I settled on writing romantic suspense.  So yes, I think I gravitated toward that from the start.  But my real goal was to write emotionally compelling stories, whether or not they contained suspense.   I wanted to write stories that resonated with the readers, that would linger in their minds, not just create a clever plot.  For recreational reading, I read everything from mysteries and comedies to suspense.  As far as my favorite suspense authors go, Daphne du Maurier is a classic, of course.  Sandra Brown is another writer I really respect.  I also like Douglas Preston.  He’s a master at raising the stakes and making each character’s predicament get progressively worse.

Let’s say you are working on your next novel—what do you have around you besides your computer?

Nothing very exciting, I’m afraid.  My first goal is not to let myself get distracted, so next to me I have water or tea, a nail file, hand lotion, tissues, some sort of healthy snack (vegetable or fruit) and anything else I think I might suddenly crave or need.  I also have my thesaurus and notes for the story (usually mountains of those), and other reference books.   That’s about it.

Let’s pretend: You are sitting in your favorite place in the entire world— describe what it does to your senses. What do you see, hear, and feel?

I’m sitting just outside the medieval wall in Avila, Spain on a hill facing west.  It’s evening, and dusk has begun shadowing the golden fields and silvery olive trees in the valley below.  The dwindling sun still warms the wooden slats of the bench I’m sitting on.  Swallows swoop past and careen overhead as they wheel around the ancient stone wall.  An elderly couple strolls by, arm in arm, their steps measured, practiced, and slow.  The man wears a traditional cardigan sweater and a black beret on his balding head.  The woman’s head is erect, her expression proud.  She has on her best knee-length, woolen skirt, sturdy pumps, and meticulously ironed blouse.   My husband lounges beside me with his eyes closed, and I feel content.  Everything is right in my world.

That is amazing, Gail.  What a beautiful setting.

Your books have won many awards over the years.  Is there one in particular that excited you—or shocked you when you won?

Honestly, just being nominated for an award is a huge honor, particularly at the published level because the competition is so fierce.  So even making the finals is very exciting.  As far as the contests I’ve won, I was completely blown away when Where He Belongs won the Book Buyers’ Best Award.  It not only won its category, but the overall competition as well.  I totally did not expect that.  In fact, I nearly didn’t attend the award ceremony because it was late in the evening and I didn’t think my book had any chance to win.  Getting the National Readers’ Choice Award for To Protect A Princess was also an enormous honor, one I still treasure greatly since it came from readers.  And of course, the Holt Medallion for His 7-Day Fiancée was thrilling as well.

Having won the prestigious Golden Heart with your first book, Silhouette Special Edition, Where He Belongs, what advice would you give others who are hoping to possibly achieve that award in their near future?

About the only advice I can give is to persevere.  Where He Belongs was the sixth full-length book I’d completed.  I’d been writing toward publication for twelve, long years at that point.  But no matter how many rejections I got, I kept plugging away, trying to get better and incorporate everything I’d learned into my writing.  I think that’s the key, to just keep learning and growing as a writer.  And don’t give up!  I sold Where He Belongs at the same time that it won the Golden Heart.

Thank you so much Gail for joining us today here in our beautiful lagoon. All the best to you!  It’s been a real pleasure to talk with you.

Check out Gail’s latest, High-Stakes Affair in her recent Stealth Knights series. You can find her books through the following links:

Both the Barnes and Noble paperback and nook are at this link: