I am absolutely thrilled to have one of the legends in contemporary romance joining us today at the Waterworld Mermaids’ pond. So please spend a few minutes learning more about her, or if you’re already a fan, asking her questions about her upcoming releases. And if you’re very good, she may share a bit more about the ingredients that have helped her remain at the top of your game for 45 titles! So, ladies and gents, NYTimes and USA Today Bestselling Author, Francis Ray.

She is a native Texan and lives in Dallas. A graduate of Texas Woman’s University, she was nominated for Texas Woman’s University Distinguished Alumni Award.  She gave the winter commencement address winter 2010.  Ms. Ray’s titles consistently make bestseller’s lists such as Blackboard and Essence Magazine. INCOGNITO, her sixth title, was the first made-for-TV movie for BET. She has written forty-five titles to date. Awards include Romantic Times Career Achievement, EMMA, The Golden Pen, The Atlantic Choice, Borders 2008 Romance Award for Bestselling Multicultural Romance and Written Magazine 2010 Book of the Year.

Her latest release is A SEDUCTIVE KISS with a January 31, 2012 release date!! She is currently working on AFTER THE DAWN, the third book in a new mainstream series. Her publisher is St. Martin’s Press, and her editor is Monique Patterson, Senior Editor. Since March 2010 her agent has been Holly Root with the Waxman Literary Agency. She has been writing since the early 90’s.

THE TURNING POINT, her first mainstream, was a finalist for the prestigious HOLT Medallion Award. At the release event for THE TURNING POINT in May 2001, she established The Turning Point Legal Fund to assist women of domestic violence to help restructure their lives.

Three ‘KISS” books will continue the Grayson Friends series – A SEDUCTIVE KISS – January 31, WITH JUST A KISS – February 28, and A DANGEROUS KISS – June 26, 2012. WHEN TOMORROW COMES, a mainstream, will be in stores June 5, followed by another mainstream as yet untitled in January 2013.

Q.  What’s the best-kept secret about your writing process? 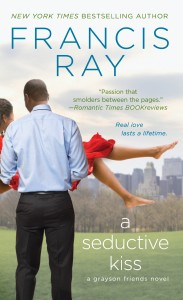 Francis said: I don’t have a secret. Wish I did. It might make this process easier.

Q.  What character have you written or are writing that keeps you up at night – just one, please:)?

Francis said: Lilly Crawford in TROUBLE DON’T LAST ALWAYS was probably one of the most difficult characters to write because of her transformation from being a victim of domestic abuse to a strong survivor.

Q.  What real person, television or fictional character has had the greatest influence on your writing style and why?

Francis said: Dwight Swain’s Techniques of the Selling Writer probably influenced me the most in my writing because the book and meeting Mr. Swain gave me a greater understanding of characterization.  Characters, to me, are the backbone of a good book.

Q.  What book title is the current “hot read” on your bookshelf?

Q.  What has been the biggest change in contemporary African American romance/multicultural romance in the last five years, last decade?

Francis said: Borders was really African-American author friendly. Each year at RWA they gave an award for the best selling Multicultural Romance of that year. No other retail outlet did this. Borders also sent out coupons that made it worth readers while to shop there for their books. Unfortunately, I’m not sure other chain bookstores know our products as well or will have frequent discounts. Many of my readers tell me they’re buying less books because of Borders closing. Yes, many have ereaders, but many of us still prefer books.

Francis said: If I had the time I’d write another historical, and have a Christian fiction series.

Q. As a highly successful romance author who has published more than 45 titles, what advice would you give writers breaking into today’s publishing industry?

Francis said: Learn the genre, read widely, don’t compare yourself to anyone, and join a writing organization. 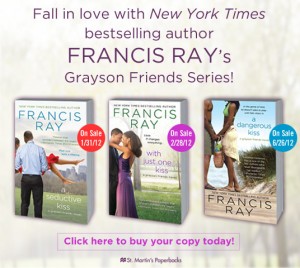 Thank you so much Francis for joining us today.

Also, we have a copy of A SEDUCTIVE KISS, Francis Ray’s new release for one lucky visitor! So please comment below for your chance to win!