This week featured Semantics from Alethea Kontis and Victory Garden by Avery Flynn. Recently, we corned our fellow mermaids in the lagoon and got the story behind their stories.

END_OF_DOCUMENT_TOKEN_TO_BE_REPLACED 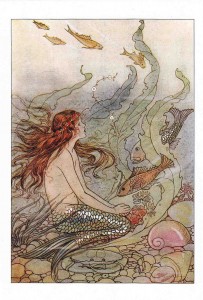 “What are you doing out here?”

It had taken him long enough to find her. Holly felt Jacob’s touch on her shoulder but did not turn around. Time was too fleeting. She wanted to revel a little longer in the chill of the dark Spring night, the giggle of the creek below her, the crunch of the grass under her feet. Charlie’s mind hadn’t gotten the grass quite right yet.

“I was scolded for talking to the children,” she said. “So I came out to catch fireflies by the water.” She scooped up a lightning bug that had rested on the branch beside her, serenely blinking like an empty street on the day after Christmas. Holly remembered Christmas, and the little girl who had dreamed about it once. Holly had taken her name.

“Technically it’s not catching when you don’t chase them,” said Jacob.

“Technically it’s not chasing when they wait to be found.” Even after so long, it was ever the argument with them.

“It’s not really night either, but you don’t hear me complaining.” Holly opened her palm and let the firefly escape, leaving nothing on her fingertips but wishes and dew.

“I’m not complaining,” he said. “Just stating the facts.”