Hello friends! I am back with another installment of my journey as a debut author.  I have completed my 2nd round of edits and my manuscript is now going into the copy edit stage – yes!  Rumor is that it will be released in June . . . but that isn’t written in stone.

Okay . ..  back to my post.  I decided that I would share with you the top five things that I learned during my edits process. So, here we go:

1. I write like I talk . . . alot!  I’m Southern, so it’s no big surprise there. But, I was shocked when my editor pointed out all of the extra (I say necessary – but she won the arm wrestle) words I use in my writing. So, she was absolutely essential to help me see that. Has it changed the way I write? A little bit but I still use LOTS OF WORDS on my first draft.

2. I can crank it out on a “real” deadline.  Yeah, I set goals for myself but I also let myself cheat, so there was a moment of panic when I saw the deadline. But, I work well under pressure and being the first-born and Type A – I need to please. ‘Nuff said.

3. I am not “hot shit”.  Okay – I never thought I was but this whole experience showed me how much I still have to learn.  I soaked in my editor’s comments and put them into action. No ego. No hard-headedness.  Just being open and honest with myself.

4. Trust is key.  I trust my publisher, Entangled – so I trusted the people they assigned to work me.  My managing editor and editor wanted me to succeed, wanted my book to be great and everything they did and said made that absolutely clear. It was easy to make revisions when I knew that fact.

5. Reading is sherbert for my brain.  When I got stuck or had to work through a problem I needed something to “cleanse my mental palate”.  That was reading for me.  I could shut my mind off and let my subconscious work on the problem while I relaxed.

So, now I’m working on a book proposal for the new Covet line and am waiting to get a R&R letter on a second submission.  Meanwhile, juggling the business side of the of the writing business is taking up lots of time.

So, that is where I am. Thanks for joining me once again as I talk about my favorite topic – me! ; )

As a thank you, I’m giving away a copy of the book that gave me such a boost 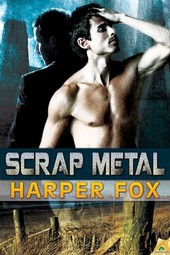 when I needed it.  Harper Fox is one of my absolute favorite authors and her new release, SCRAP METAL, left me tender, raw, and joyous when I read the last word.  She does that to me every time. 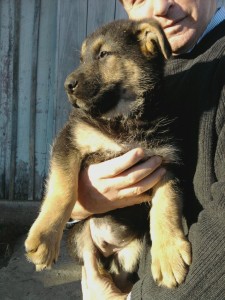 Christmas is a collection of steampunk novellas that I am currently making my way through with yultetide delight! “Holiday Kisses” is a contemporary romance set of four stories that is sitting in my TBR pile.  Lot’s of opportunities to curl up by my fire with hot chocolate, my new puppy, and a romantic Christmas tale.

Men Under the Mistletoe is a four novella collection of M/M romance by four, amazing voices in this genre: Josh Lanyon, K.A. Mitchell, Ava March, & Harper Fox. While the stories are shorter in length, they arre not short on drama, humor, sexy moments, and unforgettable characters.  And the emotion . . . wow.

As I’ve studied the craft of writing and putting my own stories on paper, my criteria of what makes a great story for me.  Sure, I want a happy ending, lots of yummy romantic sexy bits and an intriguing plot.  But, what really gets me about these authors is their enviable ability to put the emotions into every word on the page and get me completely and totally invested in the outcome for the characters.

The theme woven throughout these four stories was one of  the expectation and disappointment that can occur when two people are drawn together but not quite at the same place emotionally.  Time gives all of our destined lovers the chance to grow individually and come together at the right time for a a chance to seize the love of their life – if they can be brave enough to take it. 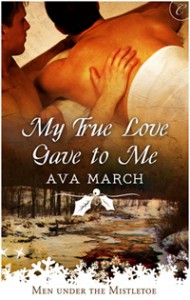 My True Love Gave to Me by Ava March

The Blurb:  Alexander Norton loathes the festive season. The revelry of the ton is a reminder of Christmas four years ago, when his first love, Thomas Bennett, broke his heart and fled to New York without a word. So when he encounters Thomas at a holiday ball, Alexander is determined not to let on how much he still hurts.

Thomas has returned for one reason only: Alexander. Having finally come to terms with his forbidden desires, he will do whatever he must to convince Alexander to give their love another chance. But instead of the happy, carefree man Thomas once knew, Alexander is now hard and cynical. Saddened to know he’s to blame for the man’s bitterness, Thomas resolves to reignite the passion he knows lies hidden behind the wall of disdain…

Set in the Regency period in London, England this story is full of young love, heartbreak, angst, sweet reunion.  Both characters as full-bodied and completely relatable but at the beginning of the story. Alexander is so much in love that he tries to drag Thomas into that place with him but Thomas isn’t ready and breaks his heart. Now his own man, Thomas is back to get the chance he passed up three years earlier but Alexander is a cynical, cold man and nothing like the open, trusting boy he left behind.

I loved the heartbreak in this story. Both let it manifest in their fear and cruelty and had to navigate the wasteland of their broken hearts to find each other again.

Ava March handles the time period perfectly without weighing down her words with too much historical information. I’ve read several of her books and they are always a delightful read.

The blurb: Historian Gavin Lowden is in Northumberland on Christmas Eve for

two reasons: to find evidence of a romantic bond between Arthur and Lancelot and to finally tell his partner, Piers, that he loves him. Piers has promised to come clean with his conservative family and join Gavin for their first holiday as a couple, but at the last minute, he bails. Devastated, Gavin heads out onto the moors alone, just as snow begins to fall …

When Piers learns that Gavin has gone missing, he is desperate to find him. He knows now breaking up was a terrible mistake, and he’s ready to take the next step in their relationship — if it’s not already too late.

If you want to write books and you haven’t read a book by Harper Fox – you need to. She is the master of wringing every ounce of emotion out of her characters but you never feel overwhelmed or melodramatic.  Her characters are real, solid people who try to survive everything life throws at them with grace, dignity and the occasional bout of emotional breakdowns fortified by a few stiff drinks. (Hell – Just read her book, Life After Joe, and you will see what I mean.)

This story mixes questions of faith – spiritual, mystical, historical, and emotional.  There were times in this story where I cried because I just couldn’t see how these two superficially opposite people could ever get together.  The old Patty Smith/Done Henley song kept going through my head – “Sometimes love just ain’t enough”

Add into it the subplot of Arthur and Lancelot and you’ve got a story that will keep you turning the page. 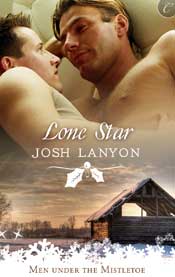 The Blurb:  Growing up in rural Texas, Mitchell Evans’s ambition to be a dancer made him a target. Though he found success in New York City, Mitch is at a crossroads, and heads home for the first time in twelve years to figure things out. When what appears to be a reindeer jumps out in front of his car, he drives off the road and into the path of the one man he hoped to avoid.

The last person Texas Ranger Web Eisley expects to see four days before Christmas is his first love. He hasn’t seen Mitch since they quarreled over coming out to their friends and family years ago. Though he’s not in the closet now, Web has worked hard for the respect of his fellow officers, but he still regrets the loss of Mitch in his life. And his bed.

The attraction between them is as strong as ever, and it doesn’t take long for the men to pick up where they left off. But is love enough to keep Mitch in town in the New Year?

Josh Lanyon is a master of the smoothest prose I have ever read. I’ve studied is books to try and figure out how he uses an economy of words that are always so pitch perfect.

This story of reunited lovers in Texas is chock full of everything I wanted in a Christmas tale: reindeer, an old ranch, a cast of secondary characters I want to have their own stories, and a protagonist who is a Texas Ranger – a freakin’ Texas Ranger!

Mitch had to get out of their small town in order to escape the rules preventing him from become his own person. Web stayed right where he was – quietly being his own man on his own terms. Two very different lives but they both recognize the gift of second chances and they might just have the strength to accept it this time around.

The Christmas Proposition by K.A. Mitchell 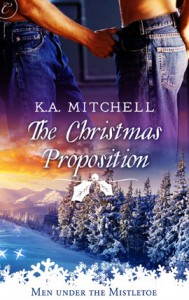 for Mel Halner. But running the family Christmas tree farm has worn down his love for the happiest season of all, and lately Mel’s been wondering what if he’d said yes to a ticket out of town with millionaire Bryce Campion three years ago.

Bryce isn’t used to people saying no to him, and he can’t forget Mel or their brief but sizzling affair. He might not have been offering forever, but Bryce can’t understand a guy as sexy and smart as Mel choosing to stay rooted on the family farm over enjoying the high life with him. He’s determined to make Mel see what he’s missed out on the first chance he gets.

K.A. Mitchell always makes me laugh. Everything from a snicker to a full-on belly laugh was wrung out of me by this story. The humorous dialogue and witty repartee gives me perpetual line envy.

Mel is a funny guy stuck in a life that isn’t what he wants and not what he chose. Bryce is a guy who life is all of his own making and he knows what he wants – and that is Mel.

I give this one 5 out of 5 Mermaid flippers.

I heartily recommend this anthology for your bookshelf. This is one that I will pull up on my Kindle year after year.

A man receives the gift of 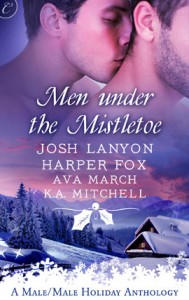 pleasure at the hands of two expert lovers. Boyhood sweethearts get a second chance at romance. Two very proper gentlemen indulge their forbidden desires. And a Christmas tree farmer has an epiphany. It may be cold outside but these four holiday novellas will warm you up.

My True Love Gave to Me by Ava March
Winter Knights by Harper Fox
Lone Star by Josh Lanyon
The Christmas Proposition by K.A. Mitchell