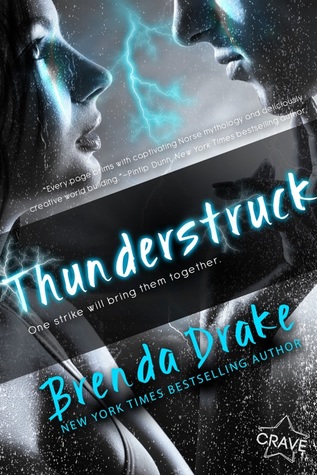 Stevie Moon is famous…at least to the subscribers on her comic review vlog. At school, she’s as plain as the gray painted walls in the cafeteria. So when Blake, the hot new guy at school, shows an interest in her, she knows trouble when she sees it. Been there. And never doing it again.

As the son of the god Thor, Blake Foster’s been given an important mission—to recover the Norse god Heimdall’s sacred and powerful horn before someone uses it to herald in the destruction of the entire universe. But while Blake is great in a fight, the battlefield that is a high school’s social scene is another matter.

Blake knows his only choice is to team up with the adorable Stevie, but she’s not willing to give him even the time of day. He’ll need to woo the girl and find the horn if he hopes to win this war. Who better to tackle Stevie’s defenses than the demi-god of thunder?

After disposing of the troll, Blake rushed to May’s house and showered. His thoughts kept going to Stevie. After hearing what Jörd said to him, he wanted to see her. The pull to go to her was too strong. He had no choice but to give in to it.

He climbed the tree outside Stevie’s room and sat on the branch. A blue light blinked on and off inside the room. He lightly tapped on the window. Muffled voices from within the room hummed against the glassed pane.

The curtain pushed aside. Amira was close to Stevie’s back when the curtain slid to the side. Stevie said something to Amira that Blake couldn’t hear through the thick glass. Amira turned away and dropped onto the bed. Stevie flipped the locks and opened the window.

“You scared the shit out of us,” Stevie snapped.

Blake tried not to laugh, but he couldn’t hold it in. “My apologies. Can I have a moment alone with you, Stevie?”

“With me?” She glanced back.

“No.” Amira heaved a sigh. “With the other Stevie in the room.”

He reached his hand out to her. “Out here is fine.”

She narrowed her gaze on him. “I don’t think so.”

“Come on,” he said. “It’s perfectly safe. This branch is thick. Trust me.”

“Stop being a chicken and go already. I have to pee.” Amira shuffled off.

Stevie hesitated before grabbing his hand and letting him guide her out the window and onto the branch. “This is crazy, you know that?”

“If you never throw caution to the wind, you’ll never be rewarded.” He sat on the branch and held her hand as she came down beside him. Her hand was warm and soft in his, and he wanted to hold it forever.

The loose pajama bottoms she wore had cats on them. Her pink tank top rode up a little and exposed a bit of her midriff. Her light-brown hair, the color of the acorns he’d gathered with his grandmother when he was a boy, rose in the wind behind her. Wide, dark eyes met his, her full lips parted in a smile.

“What did you want?” She glanced at the ground. “Wow, this is pretty high.”

“Don’t worry. I won’t let you fall.” He slid his hand across her lower back and held her waist. She shivered. “Are you cold?”

“Hold on.” He let her go, shrugged off his hoodie, and draped it around her shoulders.

She held it closed at the zipper. He returned his arm around her, grasping her waist. She shuddered, and he smiled at her response to his touch.

“You didn’t answer me,” she said. “What did you want to talk to me about?”

“Actually, I’m not here to talk,” he said. “Have you ever had an urge to do something, and once it’s in your head, you can’t sleep or think until you do the thing?”

“I guess.” When she looked over at him, they locked eyes and an intensity passed between them like the energy he felt in the handle of his hammer after catching lightning with it. He noticed a faint scar just above her cupid’s bow.

“How did you get the scar?” he asked.

“Scar?” She glanced down at her chest.

“Not there,” he whispered, lifting her chin to look into her eyes. “On your lip.”

She touched it. “Oh this? It’s an embarrassing story. Let’s just say, I learned to watch where I’m walking, especially when poles are around.”

He chuckled. “I can imagine what happened.”

She lowered her head again, her feet kicking back and forth.

He decided to take his chance and cupped her face in his hands, bringing her face to his and kissing her. It was a gentle, wanting kiss. Her lips were soft and warm against his. She tasted like May’s brownies. When Stevie hadn’t responded to his kiss, he was about to release her, but then her lips began moving with his. He cradled her in his arms and they balanced together on the branch.

Brenda Drake is a New York Times bestselling author of young adult fiction. She grew up the youngest of three children, an Air Force brat, and the continual new kid at school. Her fondest memories growing up is of her eccentric, Irish grandmother’s animated tales, which gave her a strong love for storytelling. So it was only fitting that she would choose to write stories with a bend toward the fantastical. When she’s not writing or hanging out with her family, she haunts libraries, bookstores, and coffee shops, or reads someplace quiet and not at all exotic (much to her disappointment).