Award-winning author Erika Kelly has been spinning romantic tales all her life–she just didn’t know it. Raised on the classics, she didn’t discover romantic fiction until later in life. From that moment on, she’s been devouring the genre and has found her true voice as an author. Over three decades she’s written poems, screenplays, plays, short stories, and all kinds of women’s fiction novels. Married to the love of her life and raising four children, she’s lived in two countries and seven states, but give her pen and paper, a stack of good books, and a steaming mug of vanilla chai latte and she can make her home anywhere.

Denny asked: What do you love best about your hero?

Erika said: I love Derek’s passion. As the leader of his band, he’s driven to take them to the top, and the last thing he’s interested in is a relationship. But when he falls for Violet—he falls hard. The way he claims and loves his woman is hot.

Denny asked: What do you love least about your heroine:

Erika said: I thought about this question long and hard, and I’m telling you I got nada. I love my heroine. She’s so strong and loyal and kind and level-headed…I can’t come up with a least favorite thing! Violet’s drug-addicted mom dropped her off at her grandma’s house when she was two. But when her grandma died when she was six, she went into the foster care system. With no education, no role models, no money or job skills, she’s created an amazing business for herself as a minder to recovering CEOs. And she’s honorable. As much as she wants our super hot, super intense, and super passionate hero, she resists him because she won’t betray the man who trusted her enough to hire her by canoodling with a client. I love that girl! 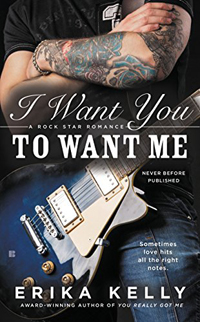 This scene made Violet finally come to life for me. I didn’t have a strong sense of her until she reached the bottom of the stairs and couldn’t get herself to walk up them. And then she opened up her heart, and I saw her. It’s also the scene where their greatest fears collide, leaving them both desolate and aching.

They’ve just made love, and he tells her for the first time he loves her. He doesn’t exactly get the reaction he’d expected.

His skin chilled as he watched her wrestle the emotion right off her face.

Finally, she got up and gathered her clothes. Once dressed, she stood there awkwardly, uncomfortably. “You coming to bed?”

So that was it? That was her response to his confession of love? He’d never said those words to anyone in his life. He loved his mom, he loved Emmie. But romantic love? “New guy’s coming. I feel like crap about Pete. I’m just…you know. I’ll be up later.”

He watched her walk away, and with each step the voice in his head grew louder to stop her. Half of him wanted to shake her, rattle some sense into her—he knew she had feelings for him, big feelings—but the other half…Jesus, the other half felt her struggle as if it were his own. He knew she needed time. He couldn’t force her, but dammit he wanted her to break through and just love him back.

When she stopped at the foot of the stairs, reaching for the bannister, his heart jumped into his throat. She turned to him, her vulnerability gutting him. Because he knew how hard it was for her to open up to him.

“I’ve never loved anybody before.”

He’d never heard that voice, all shaky and raw.

She waited—gave him a moment to get off his ass and come get her. His heart pounded so hard it hurt.

She gave him a moment, but when he still didn’t move, she turned and continued up the stairs.

Photos of the band tossing naked women off a hotel balcony have just gone viral, and their record label’s losing interest in them. Their manager hires a minder to keep them focused and on a healthy track. The first time Derek meets his babysitter she’s posing as a groupie so she can get a handle on the illegal substance situation. But Derek’s suspicious, and the game of cat and mouse they play is fun. In this scene Violet is posing as a groupie named Scarlet. Derek’s more worried about damage control than playing with groupies, so he leaves her with the other band members. She finds him alone in the lounge.

Scarlet came all the way in, leaving the door open. “I don’t think there’s room for me out there.”

She shook her head, releasing all that dark, silky hair. His senses heightened, and he became aware of her scent. Light, floral…different. “I prefer one-on-one situations.”

“You got a beer or something?” Again, she looked around the room, reactivating his suspicions. She sure as hell wasn’t looking for an unopened warm beer.

“In the refrigerator.” He pointed behind her, toward the kitchen. He’d see what she did next.

“You don’t keep anything in here?”

“By anything, I assume you’re talking about things other than liquor?” He was right about her. Underneath all that eyeliner and those flirty clothes was a shark. And that scent? It was too elegant, too…unique.

This woman was a reporter. And she was out to dig up some dirt on him.

Wow! Thank you Erika. This book sounds fantastic! I am thrilled to find it on my iPad first thing this morning!

Thank you for joining us at the pond!

29 thoughts on “New Release: Erika Kelly’s “I Want You To Want Me””