Life has been a little hectic for me lately. Back-to-back book deadlines and edits and promo and . . . well, I was little burnt out. So, the Main Man and I decided to shake things up this Thanksgiving and forego the larger family gatherings and opt for a smaller, vacation with the kiddos. The destination?  No brainer!

You see, we had promised Little Man and Lulu a trip this summer but . . .you know the summer gets away from you. We never went and the kids were disappointed. So, three weeks before Turkey Day we started making plans and it all came together just perfectly.

We treated the kids to their first train ride and took it straight into Penn Station. They were beyond excited and we only had one minor hiccup while waiting for a taxi to the hotel – the Hustler Club van went by with a HUGE ad with some chicks fake double-D’s on it and  . . . well, you can imagine the questions.  The Main Man got to handle that one. ; )

While there we were total tourists. We went to the Central Park Zoo and 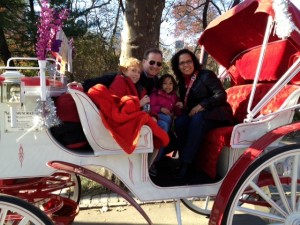 climbed the big boulders all around the lawns and splurged on a carriage ride.  We watched the parade and had Thanksgiving dinner at Rockefeller Center.

No trip to NYC is complete without taking in a show or two.  We went to see Mary Poppins and the Rockettes. Both were spectacular -shocker- and the kids eyes were bugging out the whole time.  When Mary Poppins “flew” across the theater and ended up right in front of Lulu, I thought she was going to come out of her seat with 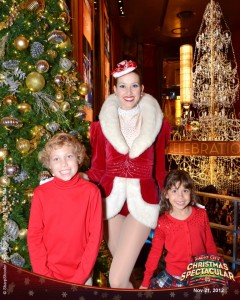 And, none of you who know me will be surprised that I was in the city less than hour and I ran right into the Naked Cowboy. Yep, a city of all those people and 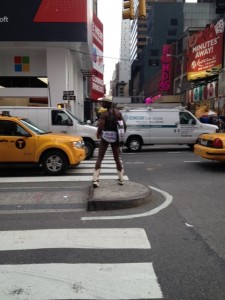 I find the hot guy dancing in his tighty-whities. He’s done pretty well for a guy who prances around in his undies. He’s a franchise now and has a “cast” of Naked Cowboys and if you want him to marry you in Times Square – he can do it!  $400 and you can be joined forever with your sweetie by the Reverend Naked Cowboy . . . seriously, I couldn’t make this stuff up.

We had a blast and the whole time my Plotmonkeys were running around my head with ideas.  I jotted down tons of notes and took lots of pics for future reference.

The city was dressed for Christmas and it put me in the mood for my fave season. Are you in the spirit yet? How are you ringing in the Holiday season?

9 thoughts on “Kicking off the Most Wonderful Time of the Year-Mermaid Style!”